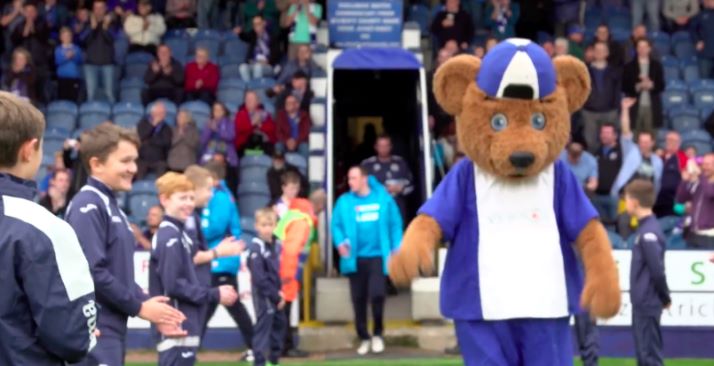 The tongue-in-cheek film, Where are Blossoms?, speaks to band members about why they have split up after the successful self-titled 2016 debut album and gone on to pastures new.

Bass player Charlie Salt has had to take a new job as the man inside the Vernon Bear costume and is seen walking out with Stockport County for a match at Edgeley Park.

Vernon is the mascot for both the Vernon Building Society and Stockport County Football Club.

The film, of course, is a spoof as the band has released its new single, I Can’t Stand It, with the new album due for release in April.

The video, which can be seen on Blossoms’ Facebook page, is filmed around Stockport, where the band all hail from and take their name from The Blossoms pub on the A6.

Simon Dawson, commercial manager at County, appears in the video and also used to wear the bear suit on match days.

He said: “Charlie’s granddad, John Fitzpatrick, is a club ambassador, so County is in Charlie’s blood – he is the County fan in the band and gets to matches as often as the band’s schedule will allow.

“My two sons went to the school with the band and they sponsored a match ball as part of their first album release.

“Charlie called me and asked if he could use the suit for the video, and of course, we were happy to be able to help out.”

Ian Keeling, our Director of Sales & Marketing, said “It is great to see two Stockport giants collaborate in such a way. Describing himself as the 6th member of the Blossoms, Vernon Bear is also very happy to support local charity and community groups in their fundraising efforts.”

* The Vernon Bear outfit is available to hire free of charge for approved charities, educational groups, and fundraising events. The costume can be hired via our online booking form, by emailing costumehire@thevernon.co.uk or calling 0161 429 6262.

Credit to SJM Concerts for the stills from the video.